What charts can’t tell you

‘One but painted thus
would be interpreted a thing perplex’d
beyond self-explication:
put thyself into a ’haviour of less fear…’

Thirty-three years separate A HARD DAY’S NIGHT from I’LL BE MISSING YOU. The first is the Beatles classic published in 1964 and still going strong; the second is by Puff Daddy and Faith Evans, and it is close to the top of today’s charts. If it stays up there, Puff Daddy and Faith Evans might become the Beatles of the next millennium; if it falls back onto the pile of has-been hits, it may fade from the memory of fans by Christmas. It could be the big one which, like the Mersey sound, captures the spirit of an age; but it could be candyfloss. The charts cannot tell you which.

Charts reduce history to numbers, and all financial analysts use them in one way or another to check their bearings on the long march of investment discovery. Numerical reference points reassure investors. Most like to feel that they are not out on their own exploring virgin territory, but buying or selling securities on terms similar to those found acceptable by others before them. And certainly, whether comparing income yields from different investments, profit growth rates, or relative prices, the slide rule of history provides a handy check on one’s judgement. Over time, prices do behave rationally and, in a free market system, capital gravitates by definition towards the investment yielding the highest return. But what if a crucial variable changes, if a fixed point on the chart is moved – what then of calculations based on the familiar historical pattern?

Patterns do change, as arable farmers in East Lothian know only too well. They have a good idea what their barley yield will be, but the last three years have been bumpers, back-to-back, and yields and incomes have soared. History suggests that if the weather cycle reverts to type, leaner years will return and judging by barley prices this year, they may be back already. But what if the world is warming, if the pattern of centuries has been broken and the mix of sun and rain fundamentally altered? The big picture has to be redrawn, the spreadsheets reworked.

Maybe financial centres are bad places in which to look for climate changes: too much heat and smoke disturbing the atmosphere. But with equity markets apparently heading ever upwards, it is clear that a pretty large gap has opened up in the usual cloud cover. The recent return from securities, like that from crops, seems to have been affected by a seismic shift of a crucial variable in the historic equation.

This chart shows one way of looking at the US equity market. Because of its size, Wall Street is the fulcrum upon which the rest of the world’s securities markets turn. 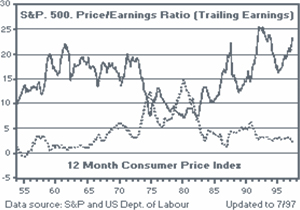 The bold line plots share price ratings by relating prices to company profits. It is a commonly used indicator of relative stock market values. The dotted line plots the US consumer price index and measures the rate of change in the cost of living or, in a word, inflation. From about 1962 the lines converge for twenty years as inflation rises and share price ratings fall. But from 1982, the lines diverge sharply.

The chart shows that investors are paying in advance for 20+ years worth of current profits when they buy the average share on Wall Street today. It also shows that the consumer price index has fallen to the lowest level for a generation. Since 1982, the rising peaks in share ratings coincide roughly with the falling troughs in the consumer price index. Despite the implications of the graph, market professionals have tended, as they always do, to relate each new market high to their own understanding of normal values – the standard chart pattern – and look for a fall. But the market defies them and continues to burst through their rationalisations. Looking back, it should be clear that something has changed since 1982.

What has changed is investors’ confidence. Market charts for 25 years from 1960 to the mid 1980s were dominated by the worldwide phenomenon of rising inflation or, in the latter part of the period, by the threat of its return. Inflation destroys savers’ confidence because it destroys the real value of financial assets such as stocks and shares. Investors who used to look twenty years ahead will only look ahead for ten. They won’t bid up for money returns that may be worthless by the time they get them. But when the cost of living is stabilised – the process known as disinflation – confidence returns and the longer the stability lasts the greater the confidence. Investors gradually extend their horizons and pay further and further into the future for money returns. That is what has been happening in equity markets in the United States, in continental Europe, and in the UK.

In a climate freed of inflation, investors in financial assets travel like rafters down a mighty river flowing steadily through even, cultivated fields. The flat terrain encourages them to voyage further and further from home. Some, whose only experience has been in the swirling vortex of rapid inflation just upstream, grow anxious and turn in to the side for fear of another upset. Others, who have travelled the whole length before, know that any rapids in flat terrain will be small ones, and they feel safe to journey on.

Little surprise then that the equity market charts where we began should be frightening the faint-hearted with the ghostly reach of history. The charts give reference points all right, but for a foreign, inflation-prone landscape which we have left upstream. At the end of the day, security prices are driven neither by statistical comparisons nor by any historical justification, but by investors’ confidence. Confidence is what has changed, with inflation, but the charts cannot measure it.

Before letting go the reins of history entirely, it may be wise to remember that confidence, like fortune, is a fickle jade. Many before now have learnt the hard way that the peak of complacency coincides with the top of every bull market, and loads of happy punters were busy saying the world had changed just before the 1929 crash. No doubt the current uptrend, however soundly based, will get carried to an extreme like all the rest. Yet for as long as it lasts, confidence will push out the limit of that extreme.

Those who think it has already been reached, if not exceeded, will no doubt breathe a sigh of relief at the recent market falls which have brought overdue, if temporary, comfort to their apprehensions. Others may care to reflect again on a 1960s mystery, the Mersey phenomenon, which changed the face of pop culture. The Beatles led the charts of their day, but few of us then, perhaps, recognised that they would change the way the world sings. The charts would never have told you.